For anyone living in New Orleans, there’s no escaping Mardi Gras. It all begins with red-and-green holiday decorations giving way to purple, green and gold everywhere. King cakes — decadent and delicious — start appearing at school, work and parties. Before long, parades begin marching through every major neighborhood, and it’s nearly impossible to stay away from the colorful sights and joyful sounds.

Tulane Law students can’t escape Mardi Gras, either — and there’s no reason they’d want to. Read on for the best of Mardi Gras around Tulane Law School this year. 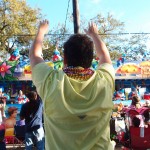 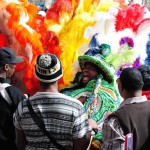 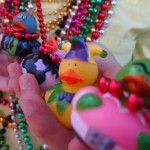 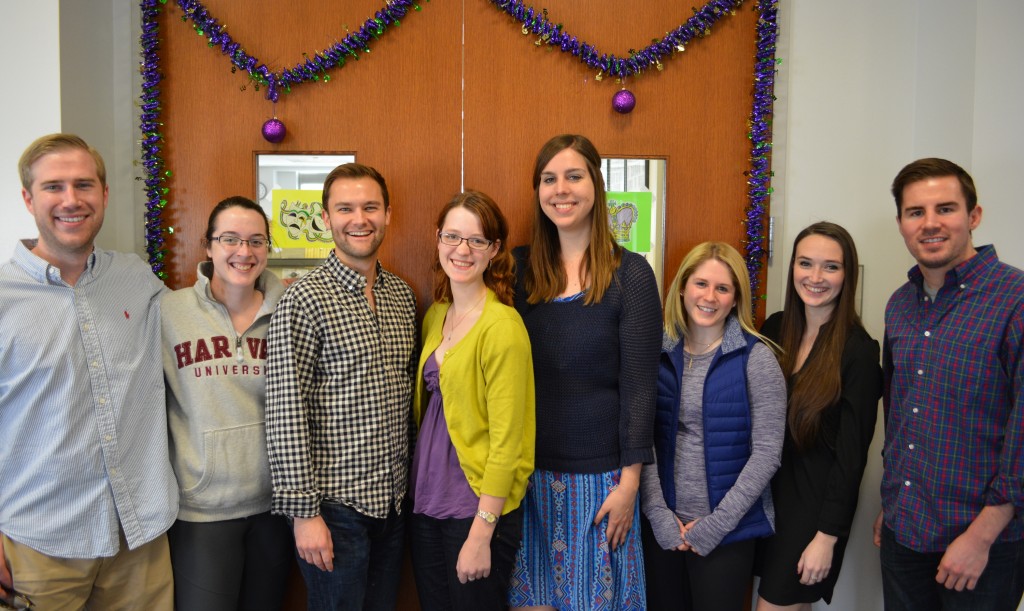 Tulane Law Review members have been reviewing scholarly articles all year, but for the past few weeks, they did so surrounded by festive Mardi Gras decorations and king cake. Junior Member Laura Cannon (L ’16) brightened up the law review suite with purple, green and gold garlands and banners, while other law review members contributed countless king cakes throughout carnival season.

“We’re in the law review suite so much that it’s become like a second home. I thought the decorations would make this a happier place for all of us to be during Mardi Gras,” Laura said. 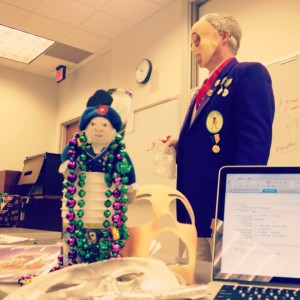 The Dictator took over Adjunct Professor Mike Butterworth’s admiralty class days before Mardi Gras. “The Dictator is nobody to trifle with,” Butterwoth said. Photo by Dennis Zhao.

2. The parade route isn’t the only place to catch beads during Mardi Gras.

Someone calling himself The Dictator invaded Adjunct Professor Mike Butterworth’s (L ‘89) class Thursday before Mardi Gras, throwing beads and overriding the lesson plan. Prof. Butterworth says he was not in class that day because he had been warned to avoid The Dictator’s takeover of his Carriage of Goods by Sea admiralty class.

The Dictator is the brazen leader of Le Krewe d’Etat, a Mardi Gras krewe that’s renowned for its satirical parade themes. Mardi Gras krewe members traditionally maintain anonymity, and locals have fun trying to recognize parade riders behind their masks each year. Revelers attempted to spot and identify The Dictator
at Krewe d’Etat’s parade Friday night, but the
masked man’s identity remains a mystery.

It cannot be confirmed or denied whether Prof. Butterworth himself is a member of any Mardi Gras krewes at this time. 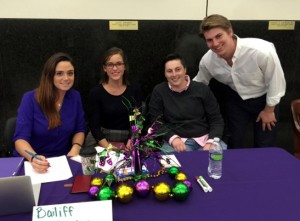 During the Mardi Gras Invitational, student competitors argued both sides of current and complex topics in sports law, a key area of focus at Tulane Law School. This year’s problem tackled issues surrounding the legalization of sports gambling and an MLB franchise relocation under baseball’s antitrust exemption.

The invitational drew approximately 95 competitors from 32 law schools throughout the country, and they were judged by attorneys and judges in each round.

“The practitioners are genuinely interested and eager to learn about the issues in the problem, making for intense and highly interactive oral arguments,” said Shauna DiGiovanni (L ’15), moot court administrative justice for invitational competitions.

And it’s only fitting that Tulane hosts its annual competition the week before Mardi Gras, when competitors can partake in quintessentially New Orleans traditions during downtime.

“It is a privilege to bring 95 people from all over the country to my home, and we make sure they have a chance to not only participate in a premier moot court competition, but to truly soak up everything New Orleans has to offer,” said Shauna, a New Orleans native. “From a Mardi Gras-themed awards banquet along the parade route after Muses, to homemade pralines and Zapp’s potato chips, the competitors undoubtedly leave New Orleans eager to return.” 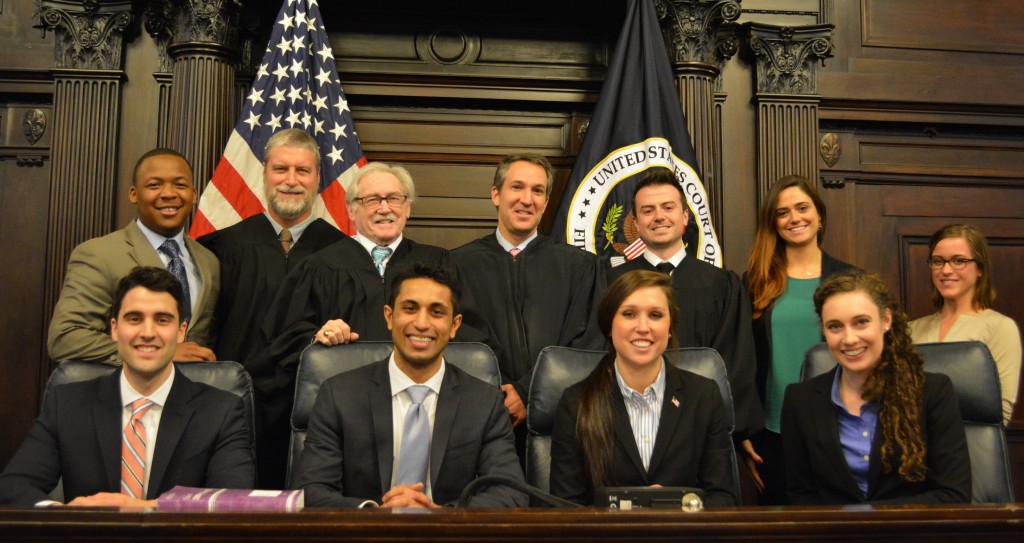 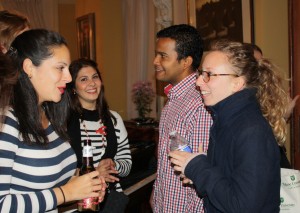 4. Camaraderie is infectious during Mardi Gras, and Tulane Law students explore New Orleans together like never before – whether it’s their first or their 30th carnival.

Seeing Mardi Gras for the first time thrills New Orleans newcomers, but Tulane Law’s international students, who come to study in the city for just a year, get a special view of the fun.

Professor Herb Larson, executive director of international legal studies and graduate programs, and his wife, Julianne, welcome Tulane’s international students to carnival season with their annual dinner before the Krewe of Muses parade. Students gather at the Larsons’ uptown home for traditional New Orleans fare, like jambalaya and mini po’boys, then vie for beads and coveted hand-decorated shoes at the parade. 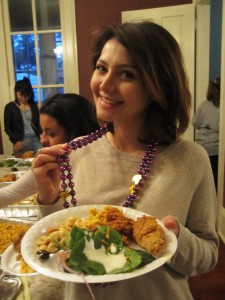 This year’s Muses party was only the beginning of the weekend’s celebrations.

“The city was full of energy, music was playing the whole day. I saw the spirit of New Orleans’ people. They were so kind and friendly to all of us. Also I got to see some of my Tulane professors in the floats…this showed me how important and valuable this festivity is to all the community,” Panamanian student Claudia Juárez (LLM ’15) said. “This weekend reminded me how lucky I am to live in this unique city.”

“It was my first ever Mardi Gras and it was a superb experience… Definitely a cultural experience I will not feel anywhere else,” Indonesian student Januar Putra (LLM ’15) said.

But, as Chinese student Dennis Zhao (LLM ’15) noted, the best part of Mardi Gras for many students was the fellowship it fostered. “For me, the greatest moment is to spend time with international friends… the whole international family getting together to share happiness,” Dennis said. 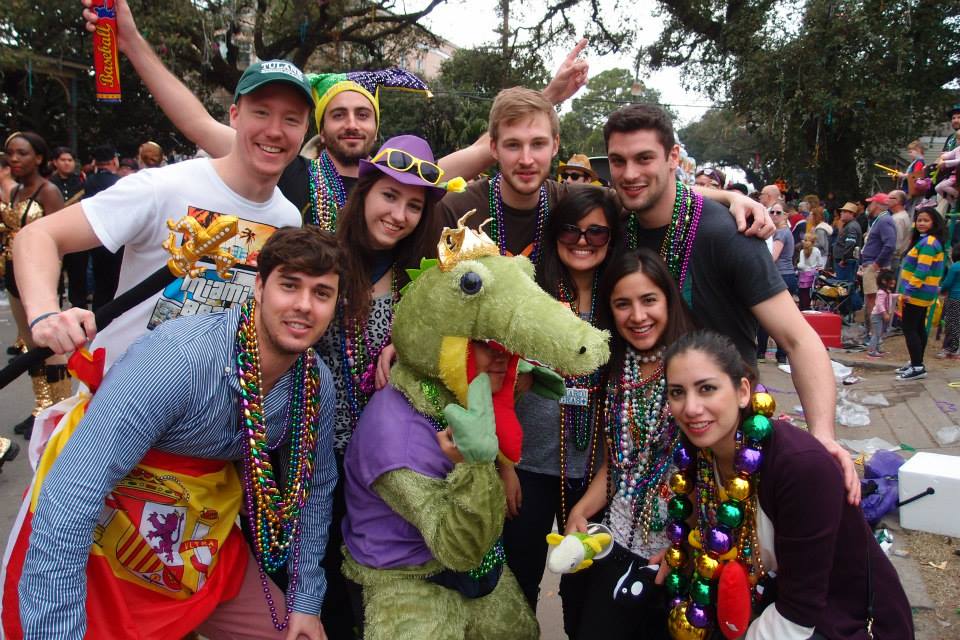 5. For most places in the world, Lundi Gras and Mardi Gras are just an ordinary Monday and Tuesday. Here, they’re days of vibrant celebration (and Tulane Law School holidays).

Who can argue with two days off, especially when they’re packed with so much energy and excitement? 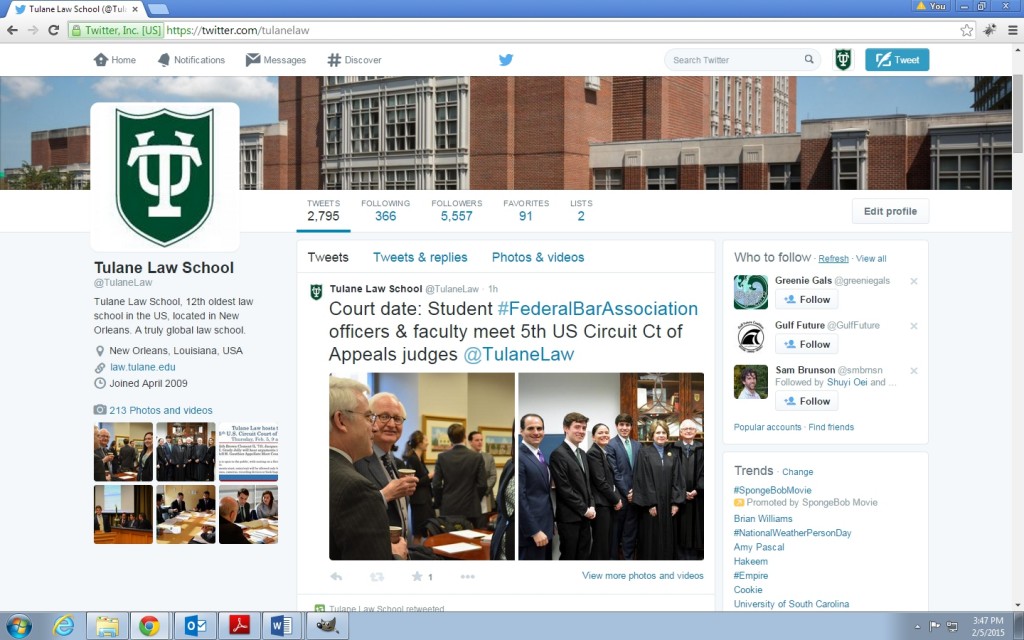 Technology streamlines the legal job search in ways not available just a few years ago. Students can apply for jobs online, email cover letters and resumes to potential employers and research firms in minutes. But it also raises questions for law students caught between digital job search techniques and more traditional approaches to entering the legal market.

Should I tweet the firm I want to work for? Should I email that recruiter or call? Do I really need a LinkedIn profile? Is it ok to use the selfie I just Instagrammed as my Facebook profile photo?

The Career Development Office works to balance law students’ and employers’ perspectives on best practices for landing a legal job. The CDO offers a host of programming covering all aspects of the job hunt. The Student Bar Association’s CDO liaisons arrange for students to take discounted headshots to use on their online profiles. (Hint: It’s probably time to lose that selfie.) The CDO liaisons also offer business card ordering to assist students in more conventional job search tactics. And Assistant Dean for Career Development Sarka Cerna-Fagan and CDO Director Katie O’Leary explain the digital dos and don’ts for the student job search. 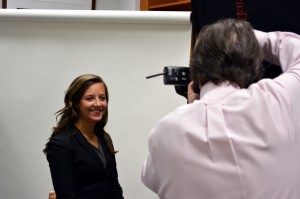 Rebecca Schwartz (L ’17) poses for $5 professional headshots at the CDO.

Do you think social media has changed the landscape for the job search? If so, do you have any advice on how students should navigate that?

Katie: I do, and I think there are some positives and some negatives. Starting with the positives, it’s much easier to connect with practitioners than it used to be. You don’t have to have an email address for them or have someone introduce you, so we often encourage students to connect, especially on professional sites like LinkedIn. I think Twitter can also be a great use for that. If you’re interested in a particular field, it’s very easy to follow the heavy-hitters and communicate with them one-on-one . . . It’s also easier to prep for interviews, because you can easily find out what firms or employers are doing based on their Twitter and Facebook pages. The negative is obviously that students are also out there from the world to see. From day one, we remind them of that. Our students are professionals, so I think it’s rarely an issue. However, they do have to be aware that employers are checking them out online and making decisions on a social media platform about whether they’d be good fits for their organizations.

Sarka: But I think there is a little caveat, and it is that the legal profession is so traditional and is famous for not keeping up with technology. . . . The students who are very creative may have a hard time complying with those traditional requirements, like ivory-colored resumes and matching envelopes. To some extent, students may feel restricted when they reach out to employers.

Katie: And I think that goes for social media, too. It’s much easier to use social media if you’re interested in a field that’s a little more cutting-edge. I always think of the sports law students when I think about this, because most of the heavy-hitting players in the sports law arena are very present on social media. A student interested in that field can find out pretty much everything they want to know online. . . . A student who’s interested in a corporate transactional setting may be a little disappointed in the fact that they’re not getting as much from the practitioners whom they’d like to connect with. That being said, I think a lot of the larger firms are doing a great job of promoting themselves on social media. I follow a lot of the big firms in our local market and can find out pretty much anything they’re doing at any time, but that is not the case for smaller and mid-size firms, and those are the employers a lot of our students go to. I think some of our students may be a little ahead of the people they’d like to connect with, because they’ve just been doing it longer. It’s a transition. 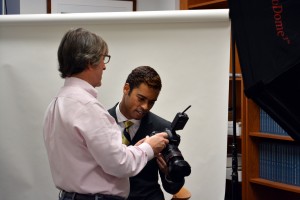 Jamar Green (L ’16) reviews headshots he can incorporate into his resume and social media profiles to help his job search.

Sarka: It’s just the little things. I remember some students could not understand why they shouldn’t have [QR] codes on their resumes. I know for sure that some of the more traditional recruiters just don’t like that. But if you are applying to a solo practitioner who does a lot of IP work, they may be more likely to click. So it does depend on where you’re applying.

Katie: It does highlight, not necessarily the generational gap, but the gap between students and professionals. Because in our field at least, the important people are not necessarily valuing technology as much, and students may be valuing it a little too much. I feel like both sides could get to a happy medium. It is an issue we have with students – you can’t always email, you can’t always expect texts, you sometimes have to get on the phone or in person and chat.

Sarka: Lawyers are also used to talking a lot, and now the students and younger population seem more comfortable texting and emailing. Sometimes, we have had issues when emails are not as clear as talking to someone in person. Students should think about getting outside their comfort zones and meeting in person or picking up the phone, rather than sending emails or text messages.

Katie: But, to answer your question, that is the flip side of it. Students have to kind of work backwards, because they need to work within the parameters of the decision-makers in the field. At some point, those decision-makers may come around to more social media, more technology, more texting, but at this point, I don’t think the majority of the field is there.

Sarka: They still need to play according to the old rules.

Q: So it sounds like social media is a good resource for students, but it isn’t a substitute for the traditional ways of communicating with employers.

Sarka: That will happen when these students become partners one day!

Katie: But by then the new students and associates will be onto something else and won’t even use email anymore! 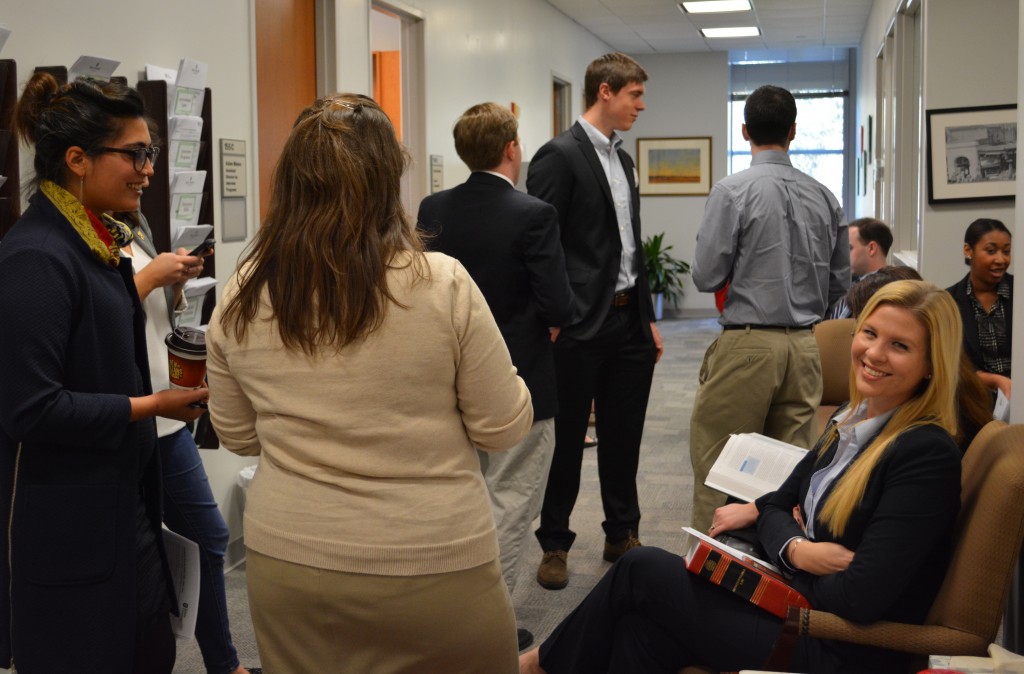